On 21:19, evening time, Daniel Ricciardo was announced as 2nd driver for the Infiniti Red Bull F1 team for 2014 on the austrian TV channel Servus TV.

Webber will compete in the FIA World Endurance Championship in 2014, including the 24h of Le Mans, in a Porsche LMP1 car.

Ricciardo is in the Red Bull Junior programme since 2010.

He was test and reserve driver and also drove in the WSBR, finishing 2nd in the standings.

He then joined Scuderia Toro Rosso in 2012.

His teammate Jean Eric Vergne was always more consistend on points, but Ricciardo was the faster driver, especially on one Qualifying lap.

The decison from Red Bull to take Ricciardo was quite obvious.

It would be stupid if they won’t have taken Ricciardo, because then the philosophy of the Toro Rosso team would be in question.

All image credits to Sutton Images

Sebastian Vettel wins a controversial Malaysian GP ahead of his teammate Mark Webber and Lewis Hamilton.

Alonso crashes out at the start of the race

Vettel makes a good start, just as his teammate Webber, what was a bit unusual.

Alonso tried to overtake Vettel on the outside into Turn 1 but made contact in the entry to Turn 2.

In the 2nd lap on the start/finish line he drove over his frontwing and ended in the graveltrap at Turn 1. He had to retire. 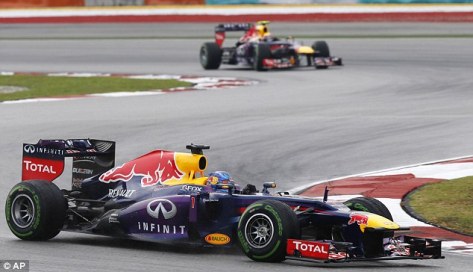 Webber had a good strategy so he came ahead of Vettel. Vettel left a gap for a while, but it all changed very soon.

The team wanted Vettel to slow down, because he came closer and closer to Webber.

The most controversial moment of the race was the battle between Webber and Vettel.

Vettel made a attempt on Webber on lap 42 in the 2nd DRS zone.

They were side by side through the Turns 1-4 of this lap until Vettel overtoke Webber finally on the outside out of Turn 4.

But that wasn’t the only battle between teammates in this GP.

Rosberg and Hamilton battled for the final podium spot.

It was enjoyable for the fans, but not for Ross Brawn.

Brawn wanted Rosberg to slow down, so they can keep the postions until the end. In contrast to Vettel, Rosberg didn’t really try to overtake Hamilton and kept 4th.

Chaos in the pits 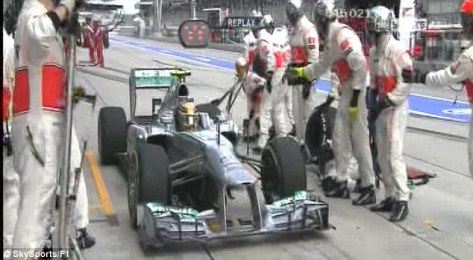 But the most action was in the pits. Hamilton was driving into the pits of McLaren to have a quick chat with them, but i don’t think that the McLaren mechanics were interested, so Hamitlon drove finally to his right box.

Pic and Ricciardo had a collision in the pits and Toro Rosso got a fine of 10,000 pounds for this unsafe release.

Hülkenberg and Raikkönnen were side by side in the pits and McLaren and Force India had their problems with the pitstops.

This was fantastic race from start to finish. Fantastic battles in the whole race and not a single safety car (!) and that in Malaysia.

Red Bull will have to say some words with Webber and Vettel, it could have all ended like Istanbul 2010.

After two race weekends in a row , F1 is coming back in 3 weeks to the Chinese GP in Shanghai.

Kimi Raikkonen and Mark Webber will both have new race engineers in 2013 after a swap between Lotus and Red Bull.

Mark Webber will have a new engineer for the 2013 Formula 1 season, with Ciaron Pilbeam being replaced by Simon Rennie.

Ciaron Pilbeam moves to Lotus to become chief race engineer. Mark Webber and Pilbeam have worked together since 2007 at Red Bull, with Pilbeam having worked for BAR prior to joining the team in 2006.

A Red Bull press release said: “We can confirm that Ciaron Pilbeam has left the team to take up a new position with Lotus.