McLaren’s Lewis Hamilton added the Italian Grand Prix to his list of Formula One victories on Sunday while Ferrari’s Fernando Alonso stretched his overall championship lead to 37 points with third place.

Perez, who qualified 12th, took advantage of a different strategy and free choice of tyres at the start to climb through the field and pass Alonso with seven laps to go.

McLaren’s Jenson Button, winner in Belgium last weekend and runner-up in Monza for the past three years, pulled over on to the grass along the pit straight and retired on the 33rd of the 53 laps while in second place.

It was also a very tough day for Red Bull. Vettel climbed up to third by Lap 20, but his indiscretion with Alonso earned him a drive-through penalty and later he was advised to switch off his engine rather than risk a failure, which was thought to be imminent. With team mate Mark Webber making a bad start, and later spinning and flat-spotting his tyres on the exit to Ascari before creeping round to the pits to retire, the team lost a lot of their advantage in the constructors’ stakes.

Vettel and Alonso has a similar incident in last year’s race, but on that occasion it was the Ferrari defending and no penalty was issued.
“Last year was not a penalty and this year is a penalty,” said Alonso. “That is the big difference for the people that understand this.”

At least four drivers could be in the running to race the banned Romain Grosjean’s black and gold Lotus at Monza this weekend.

F1 veteran turned Indycar driver Rubens Barrichello is desperate to break back into his favourite category, and has admitted his interest in Grosjean’s seat to his 1.7 million Twitter followers.

“People are asking (whether) if Lotus called me to race in Monza, would I go? The answer is YES,” said the 40-year-old.

Team boss Eric Boullier has confirmed that official reserve Jerome d’Ambrosio is “80 per cent” assured the seat. But Jaime Alguersuari, the official Pirelli test driver, told Spain’s AS sports newspaper that he is also “ready to race in Monza”. “I’m ready to race, of course I am. It (Lotus) is a big team with possibilities — I would climb into the car tomorrow, no problem.” Asked if he has a real chance of being called up by Lotus, Alguersuari answered: “I don’t know, I have no idea how things are, but I am here and ready to do anything.”

And reports in the German-language media said former Force India driver Adrian Sutil might be another outside chance for the drive. Meanwhile, Ferrari is definitely not on the lookout for a stand-in driver for Sunday’s Italian grand prix, despite championship leader Fernando Alonso admitting the Grosjean crash had left him with a sore shoulder.

“Today I woke up with no pain,” he told his million Twitter followers, “and 200 per cent ready for Monza!” 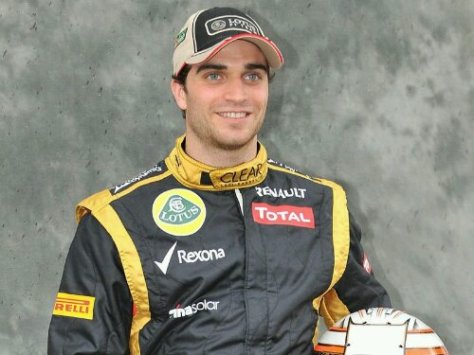 Although the team have yet to confirm who will contest the Italian Grand Prix alongside Kimi Raikkonen, Eric Boullier has said it is very likely that d’Ambrosio will race.

When asked about the d’Ambrosio’s chances of competing in Monza, Boullier replied: “Very high. There are many drivers around who are looking for a drive. We will consider first Jerome, who is our third driver. He has most of the chance to drive the car.

“But I need to sit down with him. I need to do a couple of things and then we will see.