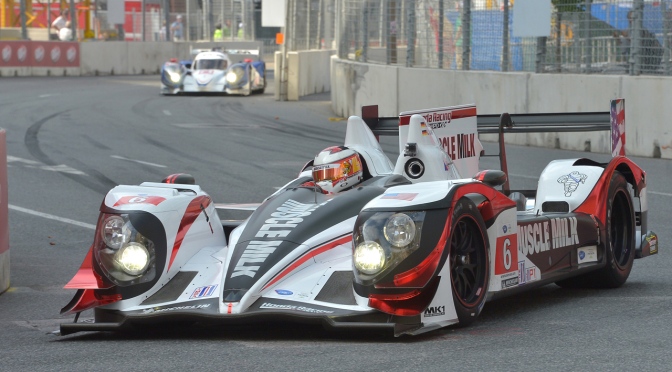 It was one of the most chaotic ALMS races i’ve ever experienced.
It wasn’t even a endurance race, it was more a crashfest.

Everything began at the start, were the Dyson Lola from Chris Dsyon jumped the start.

Klaus Graf bracked to signal a wave off for a restart. Tucker, who was behind Graf didn’t see that one coming and was hard on the brakes. Lazarro couldn’t do anything and touched Tucker at the rear.

Tucker spun and was in the middle of the track, in opposite direction.
The Falken Tire Motorsports Porsche 911 GT3 RSR from Wolf Henzler made an big frontal impact with the #551 Level 5 HPD from Tucker in 4th gear.

Then it became full chaos and suddenly 8 cars were involved in the crash, including the Paul Miller Racing and Core Autosport Porsche 911 GT cars, one Risi Ferrari 458, #93 SRT Viper and a LMPC car.

The GTC field had luck that they weren’t involved. Also the GT front runners, especially the RLL BMW’s were pretty lucky to escape from that one.

After half an hour of cleaning up all that mess, restart was attended from the drivers.

And again the Dsyon car jumped the start, so let’s try again folks! Eventually, a clean restart was made and everybody was coming unscafed through Turn 1, but Green flag only lasted for 3 turns.

The #2 ESM HPD from Lazarro spun the RSR PC car into the tire wall at Turn 4, another full cause caution.

So we already lost an hour of the race and not a single lap was made, pathetic isn’t it? Finally we hade our 4th restart of the day and everything went fine now.

Another full cause yellow, the rear bumper from Maxime Martin was in the middle of the cricuit. Then the 5th restart was made and there only 25 minutes to go.

After the restart, the #552 Level 5 HPD entry from Guy Cosmo made a driver change with Marino Franchitti.

Franchitti was on cold tires, slid off and ran into a tire bundle at chicane on the start/finish straight.
So the BMW Z4 from Dirk Müller had to brake hard as he saw the crashing Level 5 LMP2 machine and got overtaken by the two Corvettes.
Magnussen/Garcia won for the first time the Baltimore GP in the GT class.

But there was also action in the LMP1 class, as Guy Smith in the Dsyon Lola suddenly overtook Lucas Luhr for the lead. Luhr had some sort of a problem, but got the 1st position back, 3 minutes until the end.

The chicane is an issue that needs to be under investigation for the next years event.
It doens’t make it safer to drive on these railways, it makes it even more dangerous.

The next race of the American Le Mans Series presented by Tequila Patron will be at the 21st to 22nd September at the Circuit of the Americas, making a Super Enduance Weekend with the FIA World Endurance Championship.

Full results of the GP of Baltimore presented by SRT:

Robert Wickens won the DTM race at the Nürburgring ahead of Augusto Farfus and Christian Vietoris.

Farfus started from Pole ahead of Wittman. The race was started under rainy conditions, so the start wasn’t without collisions.

Rockenfeller spun at Turn 1, were in contrast Wickens had a great start comming from 10th to 3rd, but dropping back through the race to 5th.

Then he battled with Adrien Tambay for 5th and bumped the Audi driver from behind, so both were onto the grass.

Spengler got a penalty for this afterwards and was then only 14th.

After a terrible start championship leader Rockenfeller had a superb strategy which led him to the lead of the race, until he made his 2nd pitstop, he ended up being 4th.

Wickens overtoke Wittman, after he made a mistake and got 2nd. Wickens then handed the lead from Rockenfeller after he made his last pitstop and holded it till the end.

Scheider had very bad luck again, an ended up at the end of the field. Tomcyck finally got his first points of the season, finishing 5th.

Also Molina had a great race after starting on a great 4th position he ended up being 8th.

It was great race to watch, but i couldn’t get any footage of the race because it was raining pretty hard.

I’m quite delighted that i didn’t watch the live coverage on TV, because the ARD (the channel which is broadcasting the DTM) always switch to the World Championship in Athletics (what was also live) in the middle of the DTM coverage, what is quite awful.

So in contrast to the WEC at Spa, were we only had the Porsche GT3 Benelux Cup with only had 11 cars in the field, at the Nürburgring we had the FIA Formula 3 Europen Championship, Auto GP, porsche Carrera Cup and the VW Scirocco R Cup.

They all had good amount of cars in their fields, especially the Carrera Cup with 34 cars (!).

F3 wasn’t really that exciting, the drivers aren’t driving like in GP2, they are pretty calm and careful at overtaking, which actually didn’t take place. Marciello (Ferrari F1 junior driver) won all three races and it looks he’s going to win the championship with only 3 venues to go.

Carrera Cup and Scirocco Cup had the best races, especially the Scirocco Cup, despite the big crash frm Tomas Schreier in Race 1, which was red flagged afterwards.

My footage of the races will come soon. 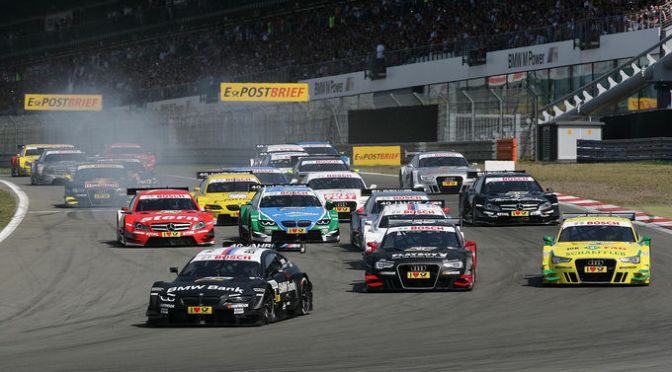 Note: I’m only writing a preview to this , because i’m going to the Nürburgring this weekend. Normally i won’t write a preview for the DTM races.

Yes i know, i have written an negative article about the DTM some weeks ago, but these are the reasons why still go to the DTM this weekend:

1st: I really like the Nürburgring itself, Nordschleife and GP circuit.

2nd: The DTM on track action is most of the time pretty good (despite DRS)

3rd: There many support series includiing the FIA F3 European Championship and Auto GP (yep there were Narain Kartikehyan is driving now) and they’re all pretty good to watch.

So now to the preview of the upcoming DTM race… 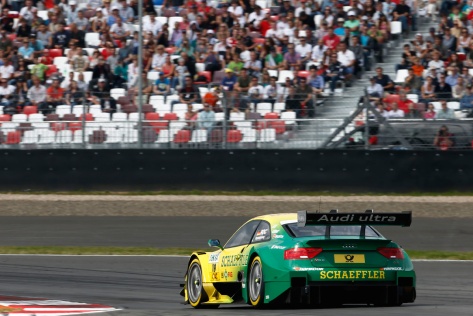 It seems like Audi have the sorted the problems from last year out. It also looks like the change from A5 DTm from RS5 DTM this year, made a bigger impact to the perfomance of Audi as expected.

The Nürburgring is his home race and he always showed great pace here, since his debut in the DTM back in 2007.

So he’s going to be the man to beat at this weekend, but watchout for Ekström.

After over 10 years in the series, Ekström proofed that he has still got what it takes to win a DTM race. I still think he’s the deserved winner of the Norisring race and also got 2nd at Moscow.

But these two are really the only ones from the 8 Audi driver’s who could win this race.

Scheider had incredible bad luck, Mortara and Green are having trouble this year.

Alberquerque and Molina don’t show any good pace, only Tambay is the driver who could get a podium but who knows? 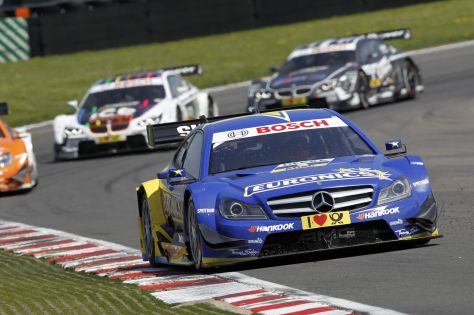 Eurospeedway at the Lausitz 2013- that was the last race were a Mercedes won a DTM race. Mercedes doesn’t lack pace, they’re head to head with Audi. The problems are the drivers.

I really thought that would be Paffet’s year, but you can’t win a championship when you do something silly like at the Norisring.

Paffet will be the favourite from Mercedes drivers. Vietoris is always a bit unobstructive, but clean and consistend, that why he’s 3rd in the drivers standings. But i don’t think he’s fast enough for a win.

Also Wickens has chances, but he needs to sort he’s Qualifying perfomance.

The other Mercedes drivers? Do they have a chance? Nope… 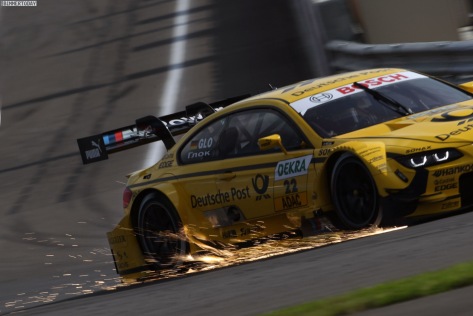 Ok, Spengler won two races this year with the BMW M3 Coupe DTM. But the best driver in a team, doesn’t he wins every race for them, see Moscow, were he really had problems.

Timo Glock looked on fire in first three races of the season, taking a 3rd place at Spielberg.

But now i’m thinking he’s going to have same season as Ralf Schumacher had in 2011.

Taking a podium spot, what got really hyped and then suddendly driving at the back of the field. The difference between Glock and Schumacher II is that Glock got his podium in his rookie season, were Schumacher II got his first podiums in his 4th season in the DTM.

Glock deserved a good F1 cockpit, but i really hope he does well in the rest of the DTM season.

And don’t forget Augusto Farfus, who won the season opener at the Hockenheimring, but can’t keep that speed on a consistent basis.

Wittman looks promising (2nd at Brands Hatch) and Werner and Hand have nothing to lose.

I will try to upload some footage from the weekend (DTM, F3 Europe, Auto GP, Porsche Carrera Cup and VW Scirocco R Cup) on Youtube next week or so. 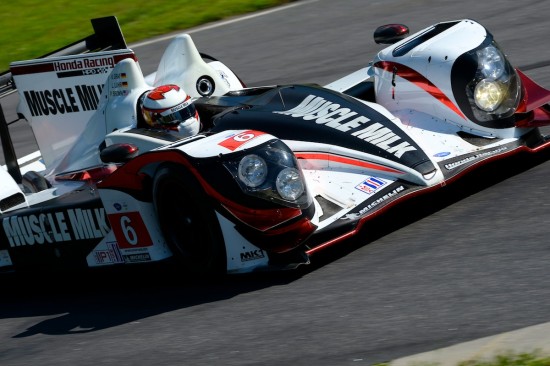 Luhr/Graf were the fastest through the 2 hours and 45 minutes  of the Road America race, the 7th round of the American Le Mans Series 2013 presented by Tequila Patron. The Dyson Lola of Burgess/McMurry came into 2nd, they were quite unobtrusive allong the way.

But the Delta Wing of Legge/Meyrick was the most impressive.

Delta Wing had a good strategy and lead the race for a while until the Muscle Milk HPD from Klaus Graf was catching up and overtook the Delta Wing for 1st. Legge/Meyrick showed the real pace of the car and what it’s cappable of.

And that was actually the first finish of the Delta Wing since Petit Le Mans 2012. 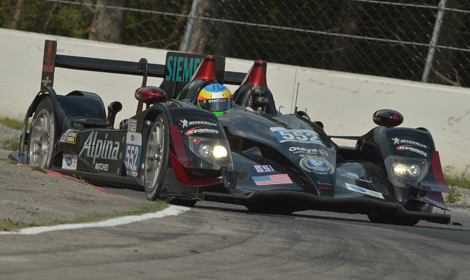 Tucker/Pagenaud were battling with the ESM car of Cosmo/Sharp for the P2 lead and no this time the Dsyon Lola was actually ahead of the P2 cars (not like CTMP).

However it was nearly a Level 5 1-2 as Franchitti/Gonzales made their last pitstop, the #01 ESM car of Cosmo/Sharp overtook them for 2nd position, and kept that till the last full cause caution. 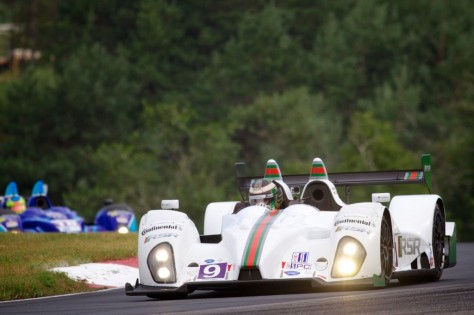 In LMPC Ende/Junqueira won in class and were even 3rd overall (!).

Duncan Ende again showed fantastic pace, but this time he had no bad luck and secured the well deserved win for RSR Racing. 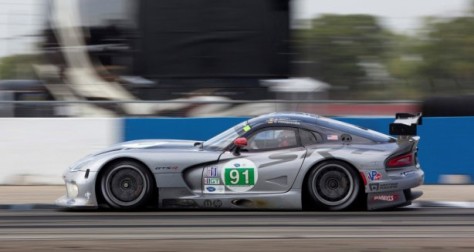 The #93 Viper of Bomarito/Wittmer was starting on pole for the 2nd in a row, but then lost the lead due pit strategy.

But the #91 Viper of Farnbacher/Gossens was making progress from 8th on the starting grid and overtoake the #93 Viper in the early stages of the race.

Then the two Corvettes of Milner/Gavin and Garcia/Magnussen were catching up and finally overtoke the #91 Viper after these guys made their last pitstop. But #91 Viper came back and overtoke both of the Corvettes to get the lead back.

The the RLL BMW team who were the favourites for the GT win there (they won 3 times in Road America since 2009) but the #56 BMW Z4 of Auberlen/Martin had early trouble in the race.

The Paul Miller Porsche of Miller/Holzer was trying to avoid the spinning RSR PC car and then also spun.

The #56 BMW the also tried to avoid the Paul Miller Porsche and onto the grass and made four 360’s. 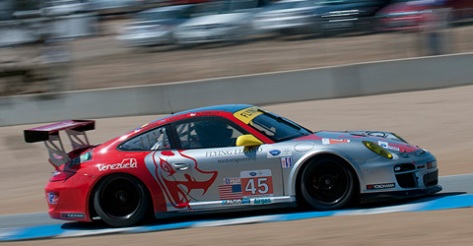 The Flying Lizard Porsche of Canache/Pumpelly won in GTC after a great battle with the AJR Porsche of MacNeil/Bleekemon.

The race was finished under yellow flags because 9 minutes before the end of the race a GTC car crashed at Turn 1, there’s no Green-White-Checkered in the ALMS.