Michael Schumacher has been hit with a fine of €2500 for not using the pit-entry road correctly during Friday afternoon practice at Spa. The Mercedes driver was charged with breaching Appendix L, Chapter IV, Article 4(b) of the FIA International Sporting Code, which covers a driver’s conduct when he comes into the pits. The stewards, which includes ex-March, ATS and Ensign grand prix driver Eliseo Salazar found that Schumacher “did not stay to the right of the bollard on the left in the pit entry” when he drove into the pits with 28 minutes of the session remaining.

But Schumacher escaped any punishment on top of the fine because he was alone on that part of the track at the time. The stewards’ verdict said: “The driver did not enter the pitlane via the pit entry as defined in the race directors’ notes to team managers. “However as no other cars were in the vicinity, the offence is not regarded as dangerous and it did not impede another competitor.”

Lotus looks set to postpone the race debut of its double DRS after announcing that it will not run the device in Saturday morning practice at Spa.

Friday’s rain hampered the team’s efforts to evaluate the system ahead of what was expected to be its first use in a grand prix. Lotus technical chief James Allison said the team had decided that with just one dry practice session likely, it was more sensible to remove the double DRS.

“Today’s rain also prevented us from seeing how the ‘device’ would perform in the expected race conditions,” he said. “With discretion being the better part of valour we will conduct P3 tomorrow with a conventional aero package rather than attempting to squeeze Friday’s intended evaluation into the precious final practice session.”

Kimi Raikkonen has carried out the double DRS testing in previous practice sessions, and Romain Grosjean was set to get his first taste of it at Spa. “I was really looking forward to trying the famous ‘device’ for the first time, but I guess I’ll have to wait,” said Grosjean. 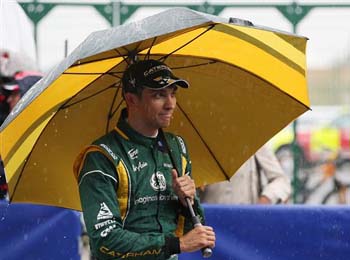 Vitaly Petrov’s future in Formula 1 could be in jeopardy as the Caterham driver has lost the financial support offered by the Russian government.

The 27-year-old driver is currently in his third year in F1, a season which could be his last unless he is able to secure more sponsors to continue beyond 2012.

“There’s never been interest from sponsors. I’ve always said that it’s impossible to find sponsors in Russia for a project like Formula 1,” she pointed out. “When there was support at the top level of government, this project worked commendably.

“I don’t rule out a scenario in which we have to end this Russian driver’s competition in Formula 1,” she added.

For yet another significant moment in Michael Schumacher’s career, the venue is ironically Spa-Francorchamps. To mark the German’s 300th Grand Prix weekend, the Mercedes driver has traded in his customary red helmet for a platinum design.

Although Belgium 2012 will not mark Schumacher’s 300th Grand Prix start, it does confirm his 300th attendance as an entrant at an F1 race. Previously, only former team-mate Rubens Barrichello had hit such a figure after bypassing Ricardo Patrese’s 257.

Other noteworthy Schumacher-Spa facts include his F1 debut for Jordan in 1991, a career-first win for Benetton in 1992, the collection of his seventh world title for Ferrari in 2004 and the 20th anniversary of his debut which was celebrated across last year’s race weekend.

Qualifying in Belgium with Mercedes has never gone well for Schumacher, but he has more than delivered on the race days of  2010 and 2011; he stormed through the field on both occasions, to seventh and fifth places in the two respective seasons.

DRS usage for the Belgian Grand Prix will come on the Kemmel Straight, as it did last year.

However, this will only be if Sunday’s race happens in the dry. By placing DRS at Kemmel, drivers will be able to use the device along what is Spa’s longest straight section, preceding Les Combes which is a popular location for overtaking.

The detection point comes on the run downhill towards Eau Rouge. As practice started on Friday, rain lashed the Ardennes venue. Should such conditions remain on Sunday, which is possible, DRS usage would not be permitted.

Second practice for the Belgian Grand Prix at Spa was a near-total washout, with not a single competitive laptime set.

With track conditions even worse than the morning session but a more promising forecast for the rest of the weekend, few saw any point in risking damage by running on the saturated track on Friday afternoon.

It was 48 minutes into the session before a car took to the track at all, with Nico Rosberg first to brave the puddles.

His Mercedes team-mate Michael Schumacher would also venture out, as did Heikki Kovalainen, the McLaren, Saubers, Williams, Marussias, Ferraris, Toro Rossos and Force Indias. Many only came out at the very end so they could do a practice start, logging some nominal times – including stopping on the grid – as a result.

Nico Hulkenberg had the most running, but still completed a mere five laps.

Ferrari did attempt to get some work done, with Massa setting off with flo-vis paint on his rear wing – although it soon appeared to wash off. The Brazilian had an engine change between sessions following his morning failure.

No one was willing to push hard, but even so Kovalainen had a spin on the way out of Les Combes and Hamilton slid over the run-off at the same point, demonstrating how slippery conditions were.

With team founder Vijay Mallya under pressure to sell off Kingfisher Airlines and rumours that none of its drivers had been paid a salary in 2012, Force India could do without further financial worries, but they keep on coming.

According to Reuters, India’s top court has instructed the company, which also backs India’s national cricket and hockey teams, to pay back the sum as its fundraising practices involving two smaller companies which raised $3.18bn over four years did not comply with securities regulations.

The Securities and Exchange Board of India has already ordered the refund – complete with 15 per cent interest – but an appeal, based on Sahara’s claim that it had been a private placement, sent the matter to the courts, who upheld the original decision and instructed the company to repay the full amount within three months. Sahara, founded by Subrata Roy Sahara, bought into the Force India team during the 2011 F1 season, after Mallya ran into trouble with a couple of his own companies, including Kingfisher Airlines, which he has come under pressure to sell off.

Meanwhile, Hulkenberg’s manager, Timo Gans, has shrugged off the claims that his client had not been paid for his services this season. “These are rumours,” he told Germany’s Sport1, “I really wonder where this information comes from — maybe people know more than we do.” Hulkenberg and di Resta are both being touted as potential replacements for Felipe Massa at Ferrari next season. 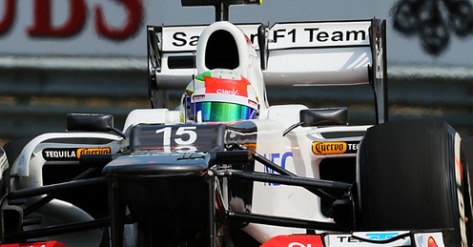 Sergio Perez has yet to decide whether he’ll continue with Sauber next season although insists he is happy with the team.

The Sauber driver has impressed in his second season in Formula One, twice putting his C31 on the podium with a best result of P2 in Malaysia.

His success has seen the 22-year-old linked to a move to Ferrari as Felipe Massa’s replacement. Perez, though, says he has yet to make a decision on his future.

“It’s getting closer to when I have to make a decision, whether I stay with the team or if I will leave,” said the Mexican driver.

“It’s still a bit early, but it has to be made quite soon, in the next weeks, although I’m not really worried about it.

“I’m in a good position, and I’m just thinking about the second half of the season, which is the most important for me.

“But I need to speak to my people to see what is going to happen about my future.

“Nothing has changed in the last month, and that is why at some point, I need to make a decision.”

Perez, though, added that he is very happy at Sauber.

“Sauber is a great team doing a fantastic job. When I go to the factory and I see the people so motivated every day, I don’t see any reason why I want to leave.

“I’m happy here, every day I’m more comfortable, and I think they can build a good car for next year, so as I say, I don’t see any reason to step away from it.” 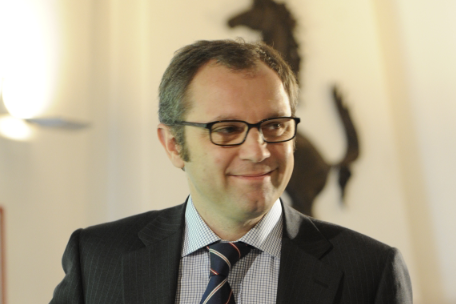 Stefano Domenicali has blamed the lack of F1 private testing for the sport’s failure to produce bright new star drivers in recent times. With the sport moving to reduce its exorbitant costs, expensive track testing has become almost a thing of the past.

Now, the few pre-season tests are used exclusively for car development and the race drivers, and even the new mid-season test – held at Mugello this year – has been scrapped for 2013.

That leaves just the ‘young drivers’ test, but that concept has been a shambles in 2012, with the twelve teams splitting their running throughout the season between Silverstone, Magny Cours and Abu Dhabi. So with Ferrari now essentially unable to use its vast resources or private venues including Fiorano for extensive track testing, team boss Domenicali insists a bad side-effect is that uncovering bright new talent is now harder.

“I don’t want to speak badly about the drivers (of today),” he is quoted by Russia’s f1news.ru, “but in my view it is clear that in recent years we have not seen many bright new stars. If we do not increase the level of testing, the problem will just get worse and worse. Testing is not just for technical innovations, but also to give young drivers the chance to learn something and make themselves known. “Without testing, Formula One puts itself at risk. In the current situation, we are not able to find the new stars because you would be having to put young drivers immediately in the races, without the necessary experience behind them, and that is not good for anyone,” added Domenicali.

Charlie Whiting has admitted Michael Schumacher should not have been given a drive-through penalty in Hungary recently.

After the Mercedes driver stopped his engine after lining up in the wrong grid spot, he then sped in the pitlane to await the re-start.

Stewards gave Schumacher, 43, a drive-through penalty for the speeding, but FIA race director Whiting has now admitted the punishment was wrong, according to Germany’s Auto Motor und Sport.

Because the race had not officially started, Schumacher’s penalty should in fact have been only a monetary fine, the report explained. The story illustrates how the sporting regulations define a race start. It means that, in actual fact, Schumacher should be celebrating only his 299th race start this weekend at Spa-Francorchamps, not his landmark 300th. That is because at Magny Cours in 1996, the then Ferrari driver did not actually start the race, because his engine failed on the formation lap.